Shooting for the Moon

A crowd is gathering around the silver punch bowl.

The heady prices of some recent transactions — including the $88 million sale of a penthouse at 15 Central Park West, the contract to sell a penthouse at One57 for more than $90 million and the recent $70 million sale of a duplex penthouse above the Ritz-Carlton to the casino magnate Steve Wynn — are emboldening owners to think this is the moment to see if some sky-high price tags will entice rather than scare off potential buyers. Or as Shaun Osher, the chief executive of CORE, likes to say, “A lot of high-end buyers and sellers want to get on the gilded bandwagon.” 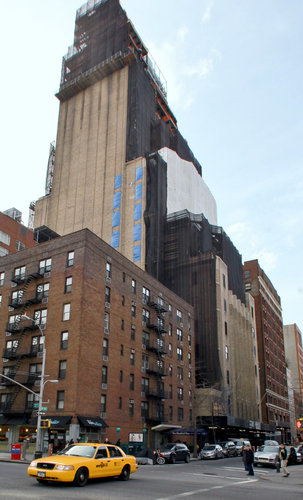 In Chelsea, a penthouse apartment at Walker Tower will be listed for $50 million.

Because of these intoxicating numbers, brokers say that a new handful of properties in Manhattanare about to come on the market with listing prices of $90 million or more.

They are also partying in Miami, where apartments and single-family homes in and around Miami Beach are being listed and sold for record numbers.

Is this wishful thinking on the part of property owners, or do they have reasons for their surging confidence to start setting prices that would have been considered outrageous only two years ago?

On paper, a good part of their optimism is based on economic problems elsewhere in the world that have sent buyers — and there are a lot of billionaires out there ready to wire over the cash — rushing to high-end real estate in cities like New York and Miami as a financial safe haven from stagnant stock markets, low-return bank accounts and onerous tax regimes.

That helps explain a lot of the frenzy, but precisely how do brokers set these prices, particularly since, at this level, a lot of the usual formulas and back-of-the-envelope calculations don’t add up?

As brokers tried to beat into my head this week, the pricing of so-called trophy properties is an art, not a science.

“What makes a trophy property is the fact that it really is an intangible, priceless object, like a piece of art,” Mr. Osher said. “This part of the market is not a rational decision, it is an emotional one.”

Those intangibles include a subjective measurement of factors like building quality, views, ceiling heights, finishes, light, air and layout. Square footage and outdoor space are factored in, as are the history and “pedigree” of the building, brokers say.

Cathy Franklin, a broker at Brown Harris Stevens, says she typically brings in four to six of her peers to help her price a property. “You always have to look at views,” she said. “You could see double or triple the price with an apartment with views versus one that doesn’t have views.”

Brokers try to rein in owners’ often lofty expectations. But they acknowledge that they haven’t cornered the market on wisdom, either. Howard Lorber, the chairman of Prudential Douglas Elliman, recalled a situation a few years ago in which he helped someone sell a house in the Hamptons. He told the seller it was worth $27 million or $28 million. The seller wanted $35 million. They agreed to list it at $33 million. “The first offer was $31 or $32 million,” Mr. Lorber said. “When I called the owner with the offer, they hung up on me.”

Jonathan J. Miller, the president of Miller Samuel, a real estate appraiser, doesn’t think the soaring asking prices are based on much more than a high-end herd mentality. “If they got it, I am going to get it,” the thinking goes, according to him. “It is all ego management.”

Within the appraisal industry there is a term for listings based on loose associations to reality, he said: “P.F.A.,” or “Pulled From Air.” As Mr. Miller explains it, “Take the highest sale you can find and apply some methodology in a very subjective way to talk yourself up to this bigger number.”

Of course, most people need appraisals to get mortgages, but not the rich. They pay cash.

With few comparable sales to go by, many would-be owners in New York are thinking P.F.A. They continue to see the sale of Sanford I. Weill’s one-of-a-kind penthouse at 15 Central Park West to Ekaterina Rybolovleva as a new benchmark at more than $13,000 a square foot. “They are citing it constantly,” Mr. Osher said. No subsequent sale has yet reached much more than $10,000 a square foot, but brokers and appraisers say they believe the benchmark has allowed prices to soar higher.

Some in the industry don’t see the seeming obsession with the $88 million sale as a bad thing. “It lifts the whole high end,” Mr. Lorber said. Mr. Osher, on the other hand, believes it is having a “negative ripple effect,” because “not all apartments in that building are created equal.”

Leroy Schecter, the steel magnate, was set to test that theory last week. He was planning to list his 15 Central Park West home — two apartments that take up the entire 35th floor of the building’s south tower — for $95 million, which would have been the highest-priced listing in the building. Last year he tried to sell the uncombined residences together for $55 million.

Alex Rodriguez of the New York Yankees previously rented one of the apartments from the 85-year-old Mr. Schecter, who has pledged to give 90 percent of his wealth to charity.

Mr. Schecter was in the process of combining and renovating the apartments but decided to halt the process and put the property on the market uncompleted. The idea was for Mr. Schecter to pay to finish the apartment to the buyer’s specifications, said Beth McBride, a spokeswoman for CORE. “It will be interesting to find a buyer at this price point that has an imagination and is willing to buy off of floor plans,” she said last week.

This week Mr. Schecter decided not to list the residence — for now. A Schecter Foundation spokeswoman did not return a call seeking further explanation.

Still, buzz and bravado can go a long way. Nick and Christian Candy, the brothers behind the One Hyde Park development in London, caught the attention of the world when they set several high-water marks in that city, topping off above £7,000 a square foot ($10,900 a square foot). They built a development tailor-made for the tastes and whims of jet-setting billionaires, said Peter Bevan, head of the Mayfair office of U.K. Sotheby’s International Realty, persuading buyers with “rarity, quality of finish, facilities, services” and a “take it or leave it” attitude.

Brokers in New York have been looking at One Hyde Park as an example of how one development can set new records. “Here everybody is speaking about that project,” Ms. Franklin said.

But as more people throng around the punch bowl, their success may depend in part on how many of their trophy properties are on the market.

Mr. Osher said he believed there were still 15 to 20 such properties in Manhattan that haven’t traded hands recently, with new ones, like the $50 million penthouse at Walker Tower in Chelsea, starting to become available. Ms. Franklin thinks there could be as many as 30 properties if owners of rare Fifth Avenue and Park Avenue penthouse co-ops decided to sell.

Will international buyers whom brokers in Manhattan and Miami so covet these days get turned off by the aggressive pricing?

If there is something brokers agree on, as Mr. Osher said, it is that “there are more billionaires in the world than trophy properties.”

But Mr. Lorber says they aren’t fools, either.

“The dream of every person that has something to sell is coming up with some international person that is going to pay substantially higher than what the market really is,” he said. “I always tell them that if those people did that, they wouldn’t be rich, and they wouldn’t be able to afford to buy an apartment.”

Picking Up the Pace in Murray Hill

Murray Hill’s popularity shows no signs of slowing down…