Year of the Condo in New York City

At least twice as many new condominium units are scheduled to hit the Manhattan market this year as in 2014, the most since 2007. That means more choice for buyers and some welcome competition among developers.

The influx comes after a five-year shortage, when new condo buildings practically had the market to themselves, allowing developers to push prices ever higher. The oncoming wave of new development in 2015, some real estate watchers predict, will temper that price growth and slow the pace of sales, providing some relief to Manhattan buyers.

“Whenever you have a strong market in a competitive environment, the ultimate winner is the consumer,” said Shaun Osher, the chief executive of the brokerage firm CORE in Manhattan, which is working on nine new projects for 2015, a total of 608 units. “I think the buyer will be the beneficiary from a robust development market. To compete, people will have to build better product.”

Over all, at least 6,500 new condo units are expected to open for sales below 96th Street across more than 100 buildings in 2015, as opposed to about 2,500 units in 59 buildings last year, according to the Corcoran Sunshine Marketing Group, which tracks new development. Inventory will be the highest it has been since 2007, when 8,052 new units were listed. 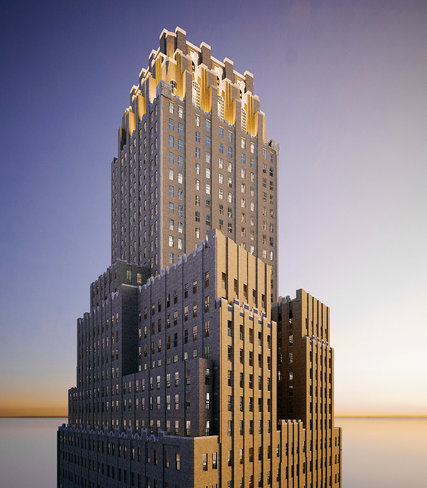 A rendering of 100 Barclay, built in 1927 and most recently the Verizon Building. Credit Williams New York

“From one-of-a-kind boutique buildings to soaring luxury towers, an incredible variety of new development will enter the marketplace,” said Kelly Kennedy Mack, the president of Corcoran Sunshine Marketing Group. All across the city, she said, “we are seeing more new residences than we have in years.”

A roster of highly anticipated towers in and around the West 57th Street corridor, known as Billionaire’s Row, are in the beginning stages of construction, with plans to open sales in the coming year.

“All eyes are going to be on this prime Midtown market,” Ms. Kennedy Mack said.

Among them is 111 West 57th Street, at approximately 1,400 feet tall, a condo tower and conversion of the landmark Steinway building by JDS Development Group and Property Markets Group, the same team that developed Walker Tower, which broke a downtown record last year with the sale of a $50.9 million penthouse.

Also commanding attention: the Jean Nouvel-designed 53W53, a tower near the Museum of Modern Art measuring roughly 1,050 feet tall, undertaken by Hines, Goldman Sachs and the Pontiac Land Group of Singapore; and Vornado Realty Trust’s 950-foot building at 220 Central Park South, designed by Robert A. M. Stern Architects with interiors by the Office of Thierry W. Despont. On the Upper East Side, 520 Park Avenue, a 54-story limestone-clad condominium, developed by Zeckendorf Development with Park Sixty and Global Holdings, has already grabbed headlines for its 31 residences, ranging in price from $16.2 million for the least expensive full-floor apartment to $130 million for the triplex penthouse. 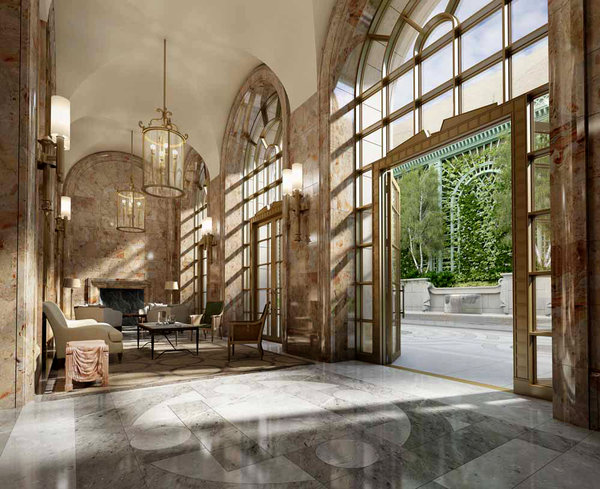 A rendering of 520 Park Avenue, where apartments will range from $16.2 million for the least expensive full-floor apartment to $130 million for the triplex penthouse. Credit Zeckendorf Development LLC and Seventh Art

With so many fancy new condo towers coming to market in the same year, there are concerns of an impending glut. Real estate watchers are mindful of the slowdown in sales at One57, the Midtown tower by Extell Development that sparked the superluxury condo boom.

“At what point does the market start to say, ‘that’s enough,’ ” said Stuart Siegel, president of Engel & Völkers NYC. “I think we need to be asking that question.”

Still, most brokers and new-development marketers say demand for trophy apartments isn’t waning. “We are of the mind-set that the market will continue to be very strong and deep for these high-end properties, as it is being fueled not just by domestic but by an international market as well,” said Susan M. de França, the president of Douglas Elliman Development Marketing. “New York City is still rivaling London as the top city” in which high-net-worth individuals are seeking to invest their capital.

What’s happening, they say, is that some high-end clients are holding off on buying in anticipation of the oncoming spate of opulent pads.

“Most projects are taking a bit longer to sign on the dotted line,” said Steven Rutter, the director of Stribling Marketing, which is handling at least 14 new developments with plans to open sales in 2015. “Buyers don’t feel the same sense of urgency. They want to see what else is out there. They want to make sure they’ve done their homework.” In 2015, he added, “things are going to sell, they will just take longer.” 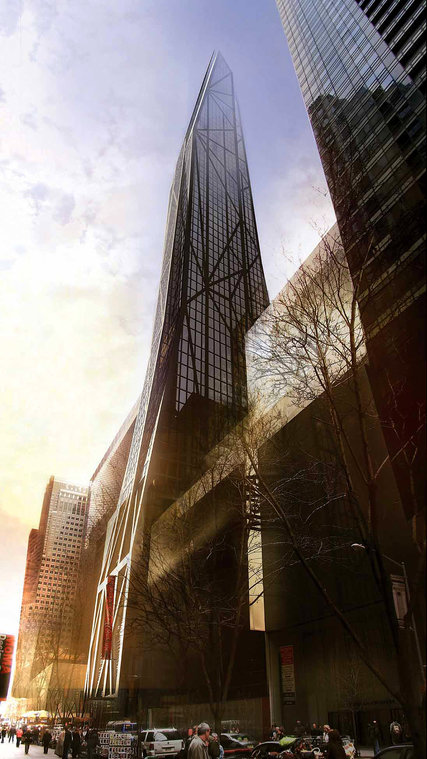 Ms. Kennedy Mack of Corcoran Sunshine says that apartments at the very top make up less than 10 percent of new development in 2015, with about 500 “ultraluxury” units priced at $5,000 a square foot or more expected to come to market.

“There is a misperception that the market is swinging drastically toward the high end,” she said. “We’re seeing a relatively steady pricing mix from year to year, which is really supported by robust buyer demand at all levels.”

Half of the new units will be in the so-called middle luxury segment, with prices between $1,700 and $2,300 a square foot. Two-bedrooms in that price range were selling for about $2.5 million in the third quarter of 2014, based on contracts signed. Half of new condos, or about 3,300 units, will be priced between $1,700 and $2,300 a square foot, up from 1,100 last year, according to Corcoran Sunshine, as developers home in on a sweet spot in the market that had been underserved.

The number of units coming to market at the so-called “entry level,” defined by prices at less than $1,700 a square foot, is also expected to rise. More than 800 units in this category are expected to enter the market in 2015, up from 306 in 2014. One-bedrooms in this segment were selling for an average of $1.19 million in the third quarter of 2014, based on contracts signed. The overall market share in this category is forecast to remain steady, with entry-level units making up just 13 percent of the new-development pie.

Soaring land costs have made it difficult for developers to turn a profit at these prices, said Jonathan J. Miller, the president of the appraisal firm Miller Samuel. So, unless they are working from a lower cost basis to begin with, as might be the case with land purchased several years ago, most developers are not building for the entry-level buyer. 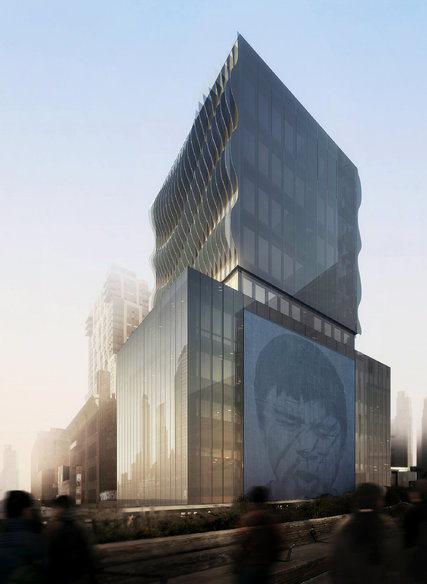 As a result, Mr. Miller said, “we are continuing to build a lot of product that is higher than what is desperately needed, because the math doesn’t work out otherwise.”

Ground-up construction will continue to dominate the landscape in 2015, making up 59 percent of new development. But conversions could produce some interesting reinventions. The original home of the New York Life Insurance Company, a full-block Renaissance-style 1899 building designed by McKim, Mead & White, is to be turned into 140 high-end apartments called 108 Leonard Street. Sales are planned to begin late this year.

The 31-story Verizon building at 140 West Street, across from One World Trade Center, is getting a residential overhaul by Magnum Real Estate Group and the CIM Group, with condos scheduled to enter the market in the first quarter of this year. Prices will range from $1.4 million for one-bedrooms to $15 million for five-bedrooms. The 1927 building will use the address 100 Barclay Street and maintain its lavish exterior, decorated with carvings of vines, flowers and birds, as well as receive a reimagined lobby by the interior designer Alexandra Champalimaud.

To stand out, developers are focusing on architecture, interior design and craftsmanship. “Everybody is designing to a very high level,” said Stephen G. Kliegerman, the president of Terra Development Marketing, “which I think is much different than what we saw pre-2008, where developers were kind of building to what they believed their marketplace was, instead of building to attract new buyers to their marketplace.” Terra Development Marketing advises Halstead Property and Brown Harris Stevens.

Along the High Line in West Chelsea, Zaha Hadid has drawn attention for her sinuous 37-unit condominium at 520 West 28th Street. The developer is the Related Companies. The first New York building by the Brazilian architect Isay Weinfeld is going up at 527 West 27th. The block-through development by Centaur Properties and Greyscale Development Group will be made up of two buildings with 36 one- to four-bedroom apartments.

And 515 Highline, a 12-unit condo with a wavy facade facing the park at 515 West 29th Street, is the second project in New York by Soo K. Chan, an architect and developer from Singapore. The condo, developed by the Bauhouse Group, will open sales this month with prices from $5 million to $25 million. The project comes on the heels of Mr. Chan’s other New York project, Soori High Line, a 31-unit condo with more than a dozen private pools, across the street at 522 West 29th. The developer was Siras Oriel Development.

“There will definitely be an increased level of construction quality,” said Roy Kim, who heads new development at Urban Compass. Buyers, he said, will not just have more choices, “but really well-designed quality projects to choose from. The ante has been upped.”

Correction: January 11, 2015
A cover article last Sunday about the next wave of condo development in New York City misidentified the occupation of Alexandra Champalimaud. She is an interior designer, not an architect.