Keeping Skyscrapers From Blowing in the Wind

Fueled by a scarcity of land and by demand from multimillionaires willing to pay record prices for helicopter views of Central Park and beyond, Manhattan developers are building ever taller, ever thinner apartment buildings on ever tinier lots. Clustered mostly in and around West 57th Street, these skinny skyscrapers are reaching heights of more than 1,000 feet.

One consequence of beanstalk proportions: The higher and slimmer buildings get, the more they tend to sway at the top.

On a typically breezy day, a tower 1,000 feet tall might move a couple of inches, according to Rowan Williams Davies and Irwin, consulting engineers. About once a year, a 50-mile-per-hour wind comes up, moving a tower of this size about half a foot. On a rare day, say once every 50 years, 100-mile-per-hour winds might move the tower as much as two feet.

While such movement does not present a safety hazard and is often imperceptible, it can make some people woozy. So developers of skinny skyscrapers are installing giant counterweights, or dampening systems, at the apex of their towers to offset building motion. This ballast is not an amenity proclaimed in large type in a glossy brochure — or one most developers care to talk about. Nevertheless, it is viewed as state-of-the-art assurance for the penthouse-buying set. 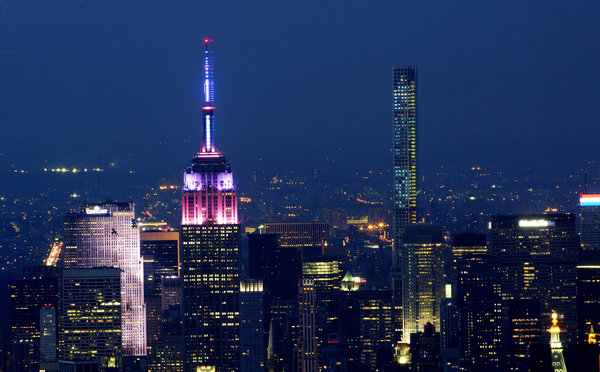 432 Park Avenue, to the right of the Empire State Building, which predates the dampening technology. Mark Lennihan/Associated Press

“It makes sense to do it, because who wants to wear a seasick band when you’re at your house?” joked Brian K. Lewis, an associate broker at Halstead Property, who is representing a buyer in contract at 780-foot-tall 520 Park Avenue, and other buyers considering apartments at the towers One57 on West 57th Street and 432 Park Avenue, which all have dampening systems. “They’re not marketing it,” he added.

Dampening systems are not as alluring a draw as a slick lobby. One type, called a tuned mass damper, is made of steel or concrete, weighs anywhere from 300 to 800 tons and is housed with other mechanical equipment at the top of the building. A typical system can take up approximately 1,000 square feet of space and utilizes a double-height ceiling. Connected to the structure’s walls by a system of pistons and spring mounts, the damper acts like a massive shock absorber, pulling the building back toward its original position whenever high winds blow.

Another type of damper, known as a slosh damper or slosh tank, uses tons of water instead of steel to add weight to the top of a building.

“It’s this incredible bit of technology that really gets hidden,” said Stephen DeSimone, the president of DeSimone Consulting Engineers, which specializes in the design of high-rises. His firm is employing mass dampers to help minimize sway at rising buildings, including Time Equities’ 50 West, a 780-foot-tall curved glass condominium in Lower Manhattan, and 100 East 53rd Street, a 710-foot-tall condominium by Vanke, Hines and RFR Holding.  “Nobody knows it’s there, standing guard, if you will.”

These massive stabilizers are increasingly an integral part of skyscraper design in New York as buildings climb from ever smaller bases. In the last five years, Rowan Williams Davies and Irwin, a Canadian firm, a.k.a R.W.D.I., has worked on nine water-based and 14 mechanical dampers in New York. That’s up from just four slosh tanks and three tuned mass dampers between the late 1990s and the last recession.

Among them: 111 West 57th Street, the 1,428-foot-tall condominium and conversion of the landmark Steinway building undertaken by JDS Development Group and Property Markets Group; 53W53, the 1,050-foot tall apartment house next door to the Museum of Modern Art, by Hines, Goldman Sachs and the Pontiac Land Group of Singapore; Vornado Realty Trust’s 950-foot-tall limestone tower at 220 Central Park South; and 111 Murray Street, a 792-foot-tall curved glass condominium by Fisher Brothers, Witkoff and New Valley, on the edge of TriBeCa.

Then there’s 432 Park Avenue, a venture of CIM Group and Macklowe Properties, which topped out last year at 1,396 feet and holds the title for the tallest residential tower in the Western Hemisphere. It has two tuned mass dampers.

Dampening systems are not required by the New York City building code, and structural engineers emphasize that this equipment has nothing to do with the integrity of the building.

“It’s purely about comfort,” said Silvian Marcus, a director of building structures for WSP, an international engineering consultancy. “It’s related to money and how luxurious the place is.”

Builders put skyscrapers through all kinds of tests to make sure they will perform well in every conceivable weather condition. Scale models are placed in wind tunnel machines that simulate extreme winds. Based on the results, changes can be made in the design, like shoring up the building with thicker walls and columns.

The terra-cotta panels and bronze latticework on the east and west facades of 111 West 57th, for example, were designed partly to reduce the wind forces on the building.

Granted, all skyscrapers sway to some degree. And most of the time that movement is so slight it is imperceptible. But with tuned mass dampers costing relatively little — roughly $5 million, not much in the scheme of things, with penthouses selling for as much as $100 million — it’s worth the investment for developers to ensure that the buyers of their apartments rarely, if ever, have any reason to consider wind speed.

“Unless you’re a supersensitive person, you’re probably not going to feel it,” said Izak Senbahar, a developer of 56 Leonard, an 821-foot TriBeCa tower that is to have a water-based damper. “But if you’re building a luxury apartment, you have to think about the comfort of every buyer.” In that sense, he said, “I think it’s a must.”

Most of the developers contacted for this article were not willing to discuss the dampers going into their buildings. If they were concerned that doing so might incite jitters among potential penthouse buyers, they wouldn’t say.

Mr. Senbahar, one of two developers who returned calls by deadline, likened the system to any other building amenity. “Your marketing people may not think a damper is sexy,” he said, pointing out that marketers tend to be more excited about features like dog spas than building engineering. “I was joking,” he added, “but a damper and a dog-grooming station are just two amenities of a building.”

Another developer not shy about discussing building sway was Simon Koster, a principal of JDS Development Group, which with the Property Markets Group is building 111 West 57th Street. With a 60-foot-wide tower, the 1,428-foot condominium is perhaps the slimmest of them all. Designed by SHoP Architects, it will have an 800-ton tuned mass damper.

“Is the building structurally sound without the damper? The answer is absolutely,” Mr. Koster said. “All buildings move. It’s about tailoring that movement” for the comfort of the occupants.

Engineers have no problems talking about dampers, enthusing about aspect ratios, milli-g’s and other measurements that go into their design. They point out that it is not so much the actual displacement of a building that is pertinent, but rather the acceleration and deceleration of the building’s sway when winds kick up.

“When you’re in a car, you may be going 60 miles per hour and you don’t feel it,” said Eli Gottlieb, a senior principal of Thornton Tomasetti, a New York engineering firm that is working on at least three Manhattan buildings that will have dampers. “But every time the car accelerates or decelerates or changes lanes, you feel the start and stop.”

That sensation is acceptable in a moving vehicle partly because it’s expected, engineers say. In a building, however, people don’t anticipate that the floor will move. “It’s your home,” said Mr. Marcus of WSP. “Imagine you start eating and you see the wine in your glass going left to right.”

While slosh-inducing storms are rare, a damper would slow the acceleration, measured in milli-g’s, by up to 50 percent, according to R.W.D.I. The perception of motion, therefore, would also be reduced.

To give developers an idea of what those milli-g’s actually feel like, R.W.D.I. has teamed up with the Fisheries and Marine Institute of Memorial University of Newfoundland. There, a simulator designed to replicate the movement of oceangoing vessels in rough seas for mariner training offers a virtual reality experience of building sway in blustery weather.

The simulator, usually outfitted to look like the bridge of a ship, is decorated with furniture when a developer is the client, including a couch, a chandelier and wine glasses filled with water. Instead of rocky seas, city views are projected on the walls. While clients sit, stand or lean against a kitchen counter as they might at home, “we take it through the full range,” with and without a damper, said Jon Galsworthy, a principal of R.W.D.I.

The developers get an idea of what they might expect to feel without a damper on, say, a windy day in the spring, during a big nor’easter, or when a hurricane hits. “It makes it very, very real and leaves a very distinct impression,” he said.

So what exactly does it feel like? “You get a little dizzy and a little disoriented,” said Maria Halfyard, a manager of the Center for Marine Simulation at the Fisheries and Marine Institute. “You’re like, whoa, this is weird. I’m in a building and I’m moving and I feel like I’m getting motion sick.”

But those who have lived in high places say the sway can also be exciting. “I actually thought it was really cool,” said Christopher Meloni, the actor, who lived with his family on the 60th floor of the Park Imperial in Midtown Manhattan for several years until moving to Los Angeles a couple years ago.

Even though the Park Imperial has a dampening system, Mr. Meloni said he “would feel the sensation and then I would look to my right and I’d see the buildings next door moving back and forth through my framed window and go, ‘O.K., I’m not crazy.’

“To me, the joy about living that high is the weather phenomenon,” he added. “Sometimes you’re fogged in and so you feel, ‘here I am flying through the clouds.’ You’ll see the storm fronts coming from over New Jersey and over the middle of the Hudson. It always was very, very exciting.”

Mr. Meloni’s apartment is on the market for $8.95 million. With its high-floor panoramic views, said Mr. Lewis, the listing broker of Halstead Property, it is “attracting strong interest.”