Downtown Prices Are Set to Get Lift

Top buildings in Lower Manhattan typically command a fraction of the prices of uptown towers, but the developers of condos in a former Chelsea office building are betting that ultrawealthy New Yorkers will pay some of the highest prices in the city for a spot in the funky neighborhood. 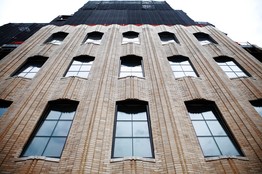 The Walker Tower has been converted to condos.Mark Abramson for The Wall Street Journal

The developers of Walker Tower, a converted 1929 Art Deco building designed by Ralph Thomas Walker for New York Telephone Co., are planning to put units on the market this week with prices between $4.5 million and $50 million. The developers are also contemplating asking $94 million for a combined duplex—several times the most expensive previous condo sale downtown.

“It’s a gamble, certainly,” said Shaun Osher, chief executive of the CORE Group, which is marketing the building. “We had a choice to go all-out and do the building justice, or do a safer route and just build railroad apartments.

The developers, JDS Development Group and Property Markets Group, chose the more risky route—investing more than $150 million in converting the building, including widening the window openings, restoring the facade and installing gracious finishes like marble bathrooms and wood-burning fireplaces.

They aimed for the top end of the market, in part, because they say an influx of tech workers, celebrities and others is creating demand for high-end product in Lower Manhattan. 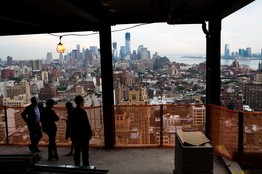 Walker Tower sits on 18th Street just west of Seventh Avenue, and a few blocks away from Google Inc.’s New York headquarters at 111 Eighth Ave., in an area that has increasingly become a hub for other technology companies. Chelsea also has a concentration of art galleries and remains relatively off the tourist radar, which brokers say attracts art-world mavens and Hollywood celebrities.

Mr. Stern’s sense that well-moneyed New Yorkers were migrating south in the city helped prompt him to buy the 24-story building for $25.25 million in 2009.

Also attractive were its unusually high 14-foot ceilings on some floors and sweeping, yet surprisingly intimate views of everything from the Empire State Building to the Williamsburgh Savings Bank Tower.

Mr. Stern was riding up the elevator to see the roof of the largely vacant commercial building in September 2008, when he got an alert on his phone that Lehman Brothers Holdings Inc. had collapsed. He nonetheless decided almost instantly that he wanted to buy the building and convert it into condos.

Following the pricey renovation work, the developers are seeking ambitious prices for the units. Even if the developer doesn’t decide to combine the two top floors, Mr. Stern said he plans to seek $50 million for the top floor, or roughly $8,400 a square foot.

The highest price recorded for a condominium downtown is the penthouse at Superior Ink in the West Village, which sold for $31.5 million in late 2010. That is a fraction of some top recent sales at 15 Central Park West and the $115 million that developer Gary Barnett of Extell Development Co. is seeking for one penthouse at One57 on West 57th Street opposite Carnegie Hall. 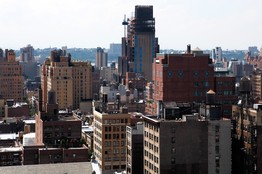 Even before the official start of marketing for the apartment, about 25% of the 50 units in the building are in contract, according to the developers.

Brokers say the lack of ultra high-end sales in Lower Manhattan is due to a shortage of luxury condos offering the kind of white-glove amenities that command top prices. Other high-end condo projects are slated to come on the market in the coming months, including roughly 145 luxury condo apartments in the Toy Building in the Flatiron District, and 150 Charles St. in the West Village.

“It’s going to be very telling over the next few months just how deep that market is,” said Leonard Steinberg, a broker at Prudential Douglas Elliman. “There’s going to be a lot of new inventory and we’ll get a much clearer picture as to what is reality and what is fantasy.”

There is no excerpt because this is a protected post.

The East Tower of the American Copper Buildings has officially welcomed its first residents. The second of the “dancing towers” on […]